Some of the measures announced by the Chancellor were as follows:

The basic rate of income tax will be cut to 19% from April 2023, 12 months earlier than planned. This will apply to non-savings, non-dividend income for taxpayers in England, Wales, and Northern Ireland, the savings basic rate which applies to savings income for taxpayers across the UK, and the default basic rate which applies to non-savings and non-dividend income of any taxpayer that is not subject to either the main rates or the Scottish rates of income tax.

Employers will only pay on earnings above the secondary threshold.

However, as announced on 23 September 2022, these rates are reverted to historical rates with effect from 6 November 2022. Furthermore, the new Health and Social Care Levy, which was due to take effect on 6 April 2023 is now scrapped.

There are no changes to the Primary Threshold and Lower Profits Limit which were increased from £9,880 to £12,570 in April 2022. These are aligned with the personal allowance threshold. 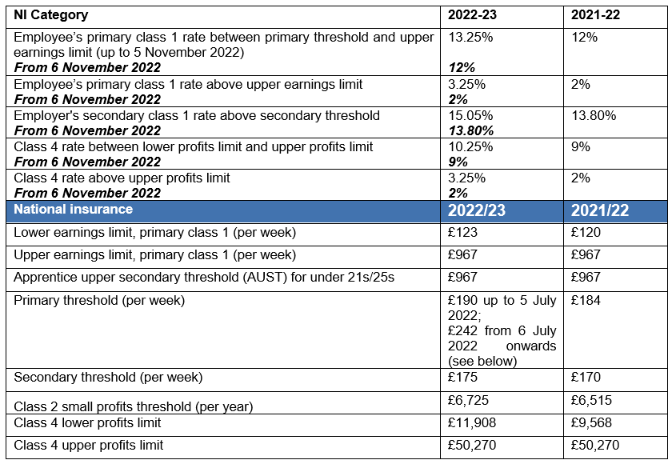 The tax-free dividend allowance is unchanged at £2,000. The increase in dividend tax rates which was due to be applicable from April 2023 is scrapped.

SDLT thresholds for residential properties in the UK have increased from 23 September 2022 as below:

The Chancellor set out his determination to make this country an entrepreneurial, share-owning democracy. He announced that the Enterprise Investment Scheme and the Venture Capital Trusts will be extended beyond 2025. The limits for the Seed Enterprise Investment Scheme and Company Share Option Plans will be increased to make them more generous. These schemes offer private investors generous tax benefits such as income tax relief, and exemption from capital gains tax and inheritance tax and they are a vital part of driving investment for new start-up companies.

From 6 April 2023, the recent reforming rules for the public sector (2017) and private sector (2021) are repealed. From that date, workers providing their services via an intermediary will once again be responsible for determining their employment status and paying the appropriate amount of tax and National Insurance contributions. This will free up time and money for businesses that engage contractors, the reform also minimises the risk that genuinely self-employed workers are impacted by the underlying off-payroll rules.

The Chancellor has announced that the £1 million level of AIA (which was due to end on 31 March 2023) has been made permanent. This means businesses can deduct 100% of the costs of qualifying plant and machinery up to £1 million in the first year.

In addition, businesses will receive full stamp duty land tax relief on land bought for commercial or residential development and a zero rate for Employer National Insurance contributions on new employee earnings up to £50,270 per year.

To incentivise investment there will be a 100% first-year enhanced capital allowance relief for plant and machinery used within designated sites and accelerated Enhanced Structures and Buildings Allowance relief of 20% per year.

This scheme will provide energy bill relief for non-domestic customers in Great Britain. Discounts will be applied to energy usage initially between 1 October 2022 and 31 March 2023.

A similar scheme will be established in Northern Ireland, providing a comparable level of support.

This is a basic guide prepared by ACCA UK‘s Technical Advisory Service for members and their clients. It should not be used as a definitive guide since individual circumstances may vary. Specific advice should be obtained, where necessary.